BELLEVIEW — Quick now, name the first three riders to be admitted to the National Jockeys Hall of Fame when it was founded in 1955.
Eddie Arcaro and Earl Sande and . . .
How about George Woolf?
If you couldn't name the three, don't feel bad. You aren't alone. But Monti ''Sonny'' Sims knows the names.

''The Iceman. George Woolf was known as The Iceman,'' said Sims, 65, manager of Good Chance Farm and a former steeplechase jockey.
Woolf was one of the greatest, according to Sims, while Arcaro and Sande, of course, were horse racing's household names.
Sims has spent a lifetime around horses and says the most memorable race was Seabiscuit's victory over War Admiral in a winner-take-all match race at Pimlico in 1938.
''I remember watching the race from the stable area atop Double A barn,'' Sims said. ''In those days, minors were not permitted inside race tracks.
''George Woolf rode Seabiscuit. He had been at our house (near Pimlico race track) that same morning. He and my dad were close friends.''
Sims pointed out that Seabiscuit, like the Sport of Kings' current sensation, Cigar, was a late bloomer.
''As a two-year-old (in 1935), Seabiscuit didn't win in his first 17 starts,'' Sims said. ''His trainer, ''Sunny'' Jim Fitzsimmons gave up on him, and he was sold to Charles Howard for $8,000.
''Three years later he defeated War Admiral and was named Horse of the Year.''
As Sims noted, match races once were extremely popular with turf fans, but seemed to fall out of vogue when the great filly, Ruffian, broke down in the 1975 duel against Foolish Pleasure.
In 1955, Nashua, ridden by Arcaro, soundly defeated Swaps in an East Coast versus West Coast showdown, which captured the imagination of the racing public.
Like his father before him, Sims, broke into racing as a steeplechase rider in the late 1940's.
''My dad (Monti) rode from 1921 to 1933 until he was injured in a spill at Laurel Race Course,'' Sims said. ''He was hospitalized nine months. That's when he began training horses.''
And, like his father, Sims' riding career came to an abrupt ending when he was hurt in a steeplechase event in the Carolina Hunt at Camden, S.C. And he, too, became a trainer after recovering from the mishap. The sport was in his blood.
''I broke my back in four places,'' Sims said. ''That was 1949. I was only 19.''
Sims worked as an assistant trainer for the next decade, until 1959, when he took his first position as a farm manager/trainer at H.P. Wilson's Twin Lane Farm in Newark, Del.

In the next two decades he held similar positions for four or five Maryland stables until the early 1980's when he was named manager at Spendthrift, Lexington, Ky.
''That's the largest thoroughbred operation (nursery) in the world,'' Sims said, noting that 52 stallions stood at Spendthrift the three years he was there.
''And two of those stallions were Triple Crown winners - Affirmed and Seattle Slew.''
Seattle Slew was the toast of racing in 1977, while Affirmed, who was battled all the way by Alydar, took the crown the following year.
''When I was there, Spendthrift went public,'' Sims said. ''It's quite an operation.
''In 1985, I came here to Good Chance Farm as manager.''
Good Chance Farm, a 320-acre spread, 5 miles west of Belleview on County Road 484, is owned by Ken Opstein of Omaha, Neb., and is presently undergoing reorganization under Chapter 11. Most of the facilities are leased to outside stables.
Gate Dancer, pride of Good Chance Farm, was the 1983 Preakness winner. The stallion presently stands at the Lucas Farm in Summerfield, carrying a stud fee of $5,000.
Sims saddled a Gate Dancer offspring, Dildei, owned by Gottfried and Ingrid Dildei of Umatilla, to his maiden victory last February at Tampa Bay Downs.

...."The Very One was stabled and trained in Maryland and was owned by Olney native Helen Polinger. After two years of racing, it was determined by her owner and trainer, Monti "Sonny" Sims [Dimauro trained her later in her career], that The Very One was a turf specialist. Mrs. Polinger was raised in Maryland and had always wanted to run a horse in the Preakness Stakes. This was her chance to do the next best thing: run a horse in the Dixie Handicap. The Dixie is Maryland's top race on the turf, run on Preakness day immediately prior to the Preakness Stakes.
In May 1979 at age four, The Very One competed in the $125,000 Grade II Dixie Handicap at Pimlico Race Course in Baltimore, Maryland. She was the only female in the field of nine and was given an eight-pound weight allowance (carrying 108 pounds) because of her gender. She was ridden by Charlie Cooke and pulled away to win by two lengths over two graded stakes winning five-year-olds in That's a Nice and Fluorescent Light. She set a new stakes record and track record for a mile and a half on the turf at 2:28 3/5. It was the fastest time run in 28 years at that distance.
In 1980 as a five-year-old, The Very One had already won six stakes races and came back to defend her title at "Old Hilltop" (Pimlico) in the Dixie. Since she had fared so well that year and won the Dixie Handicap the year prior, she was given a weight allowance of only two pounds (carrying 116 pounds compared to 118). In that race, she was ridden by a different jockey (Hector Pilar) than her regular rider. She performed well but gave up the lead at the wire to place second by a half length to graded stakes winner Marquee Universal."
...Read More

01/29/2014 1:00PM
Aqueduct: McEwen's stable helping injured war veterans
By David Grening
....."He said, ‘Gary, I want to run in the big races,’ and he really took the handcuffs off and let me buy the horses I wanted, and Uncle Sigh was one of them,” Contessa said.McEwen has seven horses with Contessa and five, including Sushi Empire, in Southern California with Eoin Harty. He also has a couple in Maryland with Monti Sims. There are 17 yearlings on the farm, some of whom will be sold.
McEwen understands that while Uncle Sigh won by 14 1/2 lengths, it is a long way from making him a Kentucky Derby contender. Saturday’s Withers, in which Uncle Sigh will face the undefeated New York-bred Samraat as well as Jerome Stakes runner-up Classic Giacnroll and the maiden winner Street Gent, should tell him more." 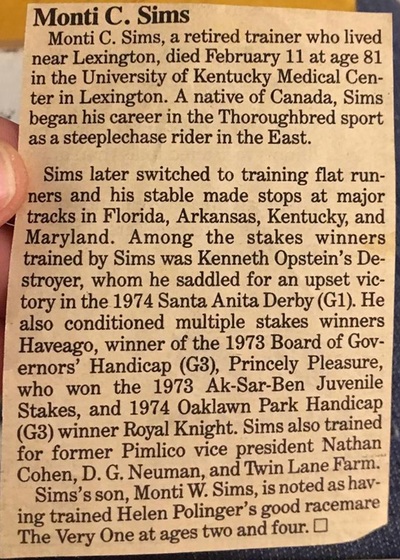 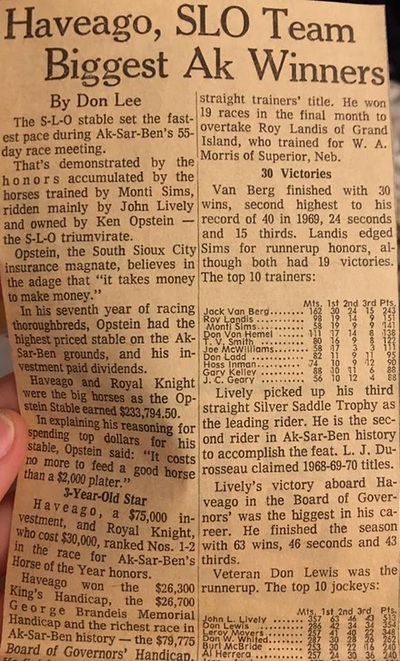 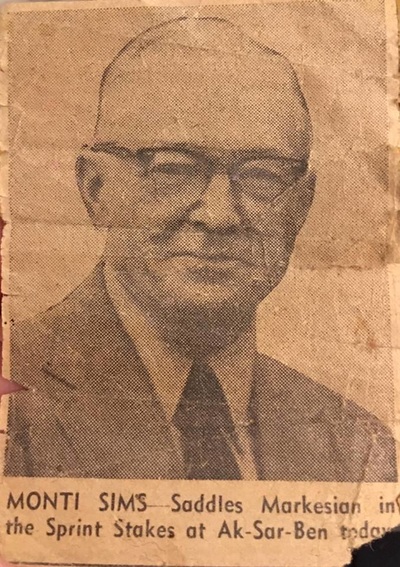